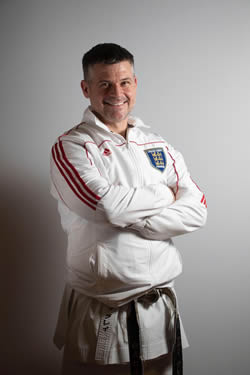 Sensei Ady Gray started training in karate in 1978 when he was just 7 years old. He was graded to 1st Dan in 1985, by Asano Sensei, 9th Dan and authorised by Kanazawa Sensei 10th Dan. He has trained across Europe and in Japan. In May 2017, Sensei Ady was awarded his 6th Dan (Rokudan), from the renowned and respected Sensei Dave Hazard, 7th Dan.

Sensei Ady Gray 6th Dan is a professional Karate coach with over 26 years experience of coaching Shotokan Karate. He has a strong knowledge of competition aspects as well as the more traditional side of the Art.

He has coached at WKF World championships and at many more Shotokan World and European Championships.

Sensei is an extremely dedicated and committed individual with an amazing eye for detail, extremely driven to be the best and demands excellence from people around him.

Sensei Ady puts the feelings, thoughts, ambitions and motivations of his team at the heart of everything he does and is very driven in being the best. In addition to his excellent coaching experience he has great management and people skills and can always find a way of getting the best from each individual. He is traditionally strict but also honest and fair.