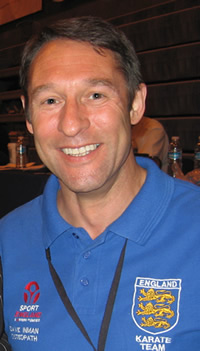 Following a successful 22-year career in the Army, serving in the Royal Electrical and Mechanical Engineers (REME), Dave undertook a Degree in Osteopathy from the British School of Osteopathy in 2001, where he was awarded the Academic Dean’s Prize in his final year. He has completed post-graduate studies and attained an FA Medical Diploma in Treatment and Management of Sports Injuries. He is an active member of the WKF Medical Commission and has co-authored two research papers (2015 & 2016) published in the American Journal of Sports Medicine and the British Journal of Sports Medicine. He has treated many elite sportsmen and women across a range of sports and was privileged enough to work at the London 2012 Olympics and Paralympics, where he was one of only 24 osteopaths selected to be part of The Core Medical Team.

As well as a strong foundation in sports medicine, Dave’s love and commitment to Karate stems from practicing Shotokan for over 44 years, attaining 7th Dan and having representative honours with the AMA GB squad. He was also privileged to spend 6 months training in Japan in the early 1980’s, studying under Sensei Kanazawa.

His aim is to establish a first class medical service for the EKF athletes, introducing best practice protocols and developing a network of medical practitioners and affiliated services around the country to support the EKF.