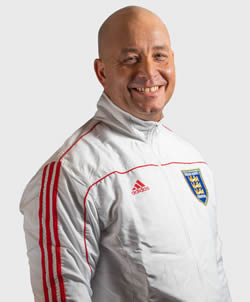 Dean started training under Sensei Terry Daly in East London in 1980, aged 9 years old. He grew up training and competing in the Uechi Ryu team, alongside Terry and legendary Wayne Otto.

His passion for teaching was always there, which is what drove him to open his own club in 1995.

Dean has produced many national and international champions throughout his illustrious coaching career and is now proud to be Assistant National Coach for the EKF.