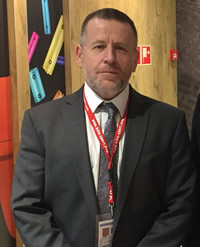 Paul started Karate as a Junior in 1976 studying Wado Ryu, and after several years due to relocation changed styles to Shotokan and this proved to be better suited to him.

Paul then started his own club in 2001 and has now been a professional Karate Instructor for the past 17 years and had all 4 of his own children involved in Karate. From the time Links Karate was started the club has gone from strength to strength from grass roots to producing many Black Belts and his successful EKF England Team Members, and their phenomenal successes and achievements.

On Joining EKKA Karate Association in 2002 which was a new beginning, under the Guidance of Sensei Mick Blackwell and Sensei Billy Brennan he became EKKA Association Head Coach, and Paul found his forte and put his drive, determination and dedication into coaching and producing the very best athletes.

In 2015 Paul had the honour of being head of the EKF Delegation for the European Championships in Zurich.

With his Club and Association Paul has produced many England Internationals, WKF European and World Medallists across the whole age spectrum, and England's very first selected Olympian for Argentina 2018.

Paul has also achieved his L.C.A Self defense Level 1 Qualification and is also the Links Combat Academy Head Instructor.