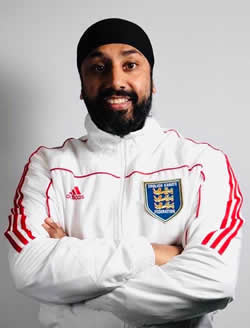 Sensei Satinder started his Karate career under the guidance of Sensei Chris Thompson 9th Dan from Washinkai Karate Do.

Satinder gained his 1st Dan under Sensei Thompson, and subsequently progressed to 5th Dan, with over 28 years of karate experience. His martial arts background include MMA, Kung Fu, BJJ and Boxing.

Satinder started his very first karate club Khalsa Karate, in Kingston upon Thames, Surrey on the day of 9/11. This was a day of mixed feelings from happiness of starting his new club to the sadness of how the world would change, however his club has since grown from one student to one of the most successful Associations of the past two decades, reaching No 2 Association in England and No 3 in British 4 Nations 2019.

His drive and ambition to succeed along with his experience and knowledge allowed him to gain his biggest coaching success  where he became National Coach to the EKF Senior Team at the Commonwealths in South Africa, Durban 2018, winning 4 out of 5 Gold's on his very first outing as EKF National Coach.

This fantastic result at the Commonwealths, then bought on the role of National Coach for Team GB Universities where Satinder coached the BUCS Senior National Team in Croatia along side Sensei Roberts at the EUSA European Championships in 2019, where team GB gained a Silver medal.

Satinder has produced many England Champions over the past two decades of which some have medalled at the highest WKF World and European Championships.