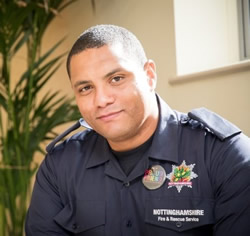 I have been practicing Karate for over 24 years and was successfully involved with the EKF National squad for 12 years as a competitor, winning the National Championships 9 times as well as numerous International tournaments around the world. Since the birth of my daughter in 2012, I wanted to be more involved with the coaching side of Karate. Teaching beginners at my Club and training aspiring athletes in the sport format. I have held the role of the Lead Coach for the University of Nottingham Karate Club since 2016 helping them win a number of Medals at the British University Championships

Coming from a Traditional Shotokan Karate background training under former World Champion Sensei Aidan Trimble, 8th Dan, in Nottingham, this enabled me to build a strong appreciation and understanding for both the Traditional format and competition aspect of Sport Karate. Representing England and Great Britain in Karate has taken me all over the world and given me so much in terms of life experiences and lessons which I have been able to use throughout my life. I have experience of being a funded athlete and then being self-reliant when the funding from Sport England was cut.

Outside of Karate I am a firefighter for Nottinghamshire. I have recently been promoted to the role of Crew Manager at one of Nottingham’s busiest fire stations. This role requires me to manage a crew of firefighters on the incident ground. This requires me to put together plans to meet the desired resolution by managing performance, Risk and the Wellbeing of my staff and members of the public.

I am a Regional Fire Brigades Union Representative this role requires me to represent members at Service Committee meetings. Bringing forward any concerns and having a vote to decide Committee decisions. On occasions I must represent Staff both in Disciplinary hearings and during raised grievances. The fire Service has also given me the opportunity to complete many Qualification/ Courses for example a IHOSH Qualification in Health and Safety for the Fire Service, Domestic Abuse Training, Safeguarding Adults, Equality & Diversity, Facilitation, Unconscious Bias and Mental Health Training. I recently completed a 16-month placement at the Services Head Quarters working for the organizational development team. My role included running the services Positive Action program as well as supporting our recent Whole Time Recruitment Process. As a result, I received a Reward of acknowledgement presented by the Queens representative the Lord Lieutenant, Sir John Peace

Why did I step forward for the role? Because I am passionate and love Karate and I want to support and help Karate in England grow its foundations and continue to build upon the work carried out recently. It’s a long road for all involved but something I am confident I can have positive effect on developing further.