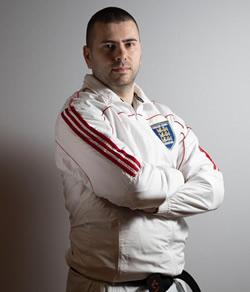 Sensei Vasile Munteanu started Karate when he was just 3yrs old, with his brothers who were also his Instructors. He has competed for many years in Romania and won several medals in national and international competitions.

Graded to 1st Dan in 2002, to 2nd Dan in 2013, by Shito Ryu Committee of Romanian Karate Federation, in 2018 in Spain, Shihan Miguel Fernandez Vazquez 8th Dan, the Chief Instructor in Europe for Japan Karate-Do Hayashi-ha Shito Ryu Kai examined him for the 3rd Dan.

He started his own club, Elite Karate Club London in 2013 and since then is a professional Karate Instructor. In 2015 he established Shito Ryu Karate Federation of England and as a Head Coach for Shito Ryu England produced many medallists in national and international competitions, including European Champions in Shito Ryu Championships.

All these years he has been training with different Sensei's from Europe and Japan. The experience as a competitor, coach and also qualified Referee gave him the experience and skills that will put into practice with the EKF Squad.