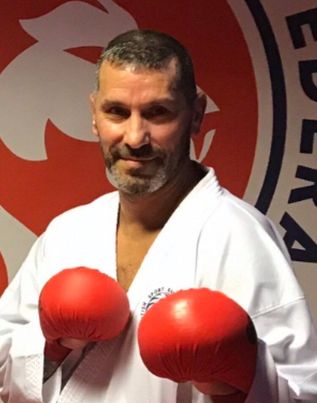 Frank has over 35+ years’ experience and began training in Wado Ryu Karate in 1980 at the age of 10 years old under the instruction of Sensei Meriam Llewelyn within Sei Ki Kan Karate Association who were affiliated to the UKKW.

Born in 1970, growing up in Skipton (Yorkshire Dales), Karate became his passion and he went on to compete, winning many national/open championships in Kumite in his 20’s. Frank also trained and competed in Freestyle Karate for a number of years before returning to the WKF format.

Frank returned to competition at the age of 38 years old medaling at English, British and Open Championships until he retired from competition in 2014.

In 2014 Frank was invited to become a Regional Coach for the North, this was a privilege as this gave Frank the opportunity to pass on his experience and knowledge of his 35+ years onto students at all levels from grassroots to international athletes who share the same passion for Karate as he does.

Frank is Founder and Head of Association of the British Sport Karate Federation and his ambition is for the association to continue to grow and develop into a strong and successful association with the highest standards of coaching and training for every student from grassroots to international level.

Frank still believes that to keep developing his skills as a coach and as a student of karate he continues to train 2/3 times a week as well as run his own club. Frank hopes to continue with his learning and development in karate for many more years to come but more importantly help students with their training to achieve their potential.